Earlier today, we heard from AD, Chrissi Rawak, Wide Receiver Coach, Alex Wood and Asst AD for Athletic Communications, Scott Day. Chrissi updated us on the progress in building the culture of our program and the success of our student-athletes. The progress in all areas has been notable in her three short years with us.
Coach Wood provided information on our opponent in North Dakota State University, and what to watch for in the game.
Scott Day reported that our Fall sports are off to the best start on record, with an overall record of 16-4. In the hours since, #9 Field Hockey has defeated #21 Rutgers and Volley has won again to go to 6-1. The Hens are rolling.
Deputy AD, Jordan Skolnick also provided information that season tickets in football are up strongly after a number of years of decline.
The next meeting will be 9/20/19 before the UPenn game. 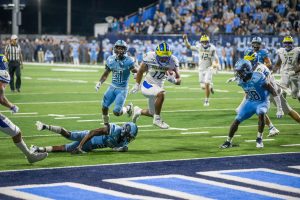