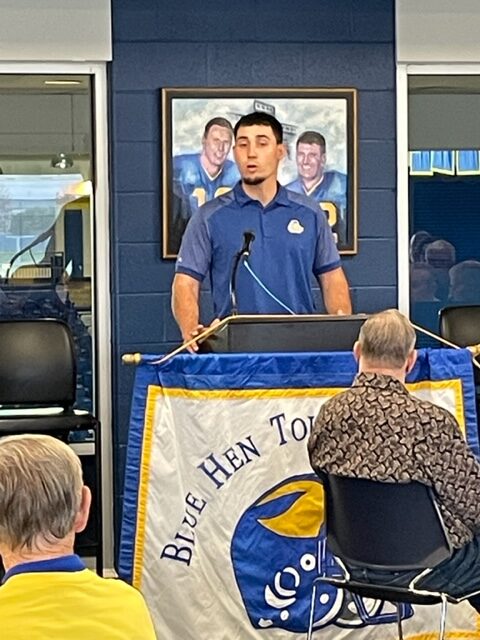 When Ryan Carty was putting his staff together who could have
been a better choice for his Quarterbacks Coach than a young
man who started for four years in Carty’s unique offense. Not
only did Sean Goldrich start but was prolific passing for over 7500
yards and rushing for 1100 yards while accounting for 71
touchdowns.
At New Hampshire Coach Goldrich told us that his first game
starting was Carty’s first calling plays for the Wildcats. Though he
was told the offense would be balanced, the first six plays of his
college career were all passes.
Upon graduation Goldrich played in the IFL for two seasons
before returning to New England to coach at the division three
level and then joining the Yale staff as the wide receivers coach.
But Coach Carty’s offense led him to Delaware to coach the
position that he played in college.
When asked about quarterbacks calling audibles at the line of the
scrimmage, Coach Goldrich stated that the “play is the play”. But
the QB does have some leeway to make slight formation
adjustments.
In his presentation, Coach Goldrich showed why he was the right
choice to mentor the quarterbacks on the Delaware squad.

Photo and narrative by Mark Werrell